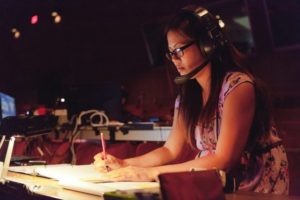 Jennifer Franco, Cypress College’s 2012 graduate of the year, said she “might be dead” if she hadn’t come to Cypress and taken a class from theater arts professor Mark Majarian in her first semester.

Franco, who started attending Cypress in her late 20s, had no idea how far she would go academically, let alone what she wanted to study. A Cypress counselor suggested some beginning classes, and she ended up in Majarian’s American Ethnic Theater course.

“I didn’t really know anything about theater at the time,” she admitted.

A few weeks into class, Majarian announced he was searching for a stage manager for the College’s dramatic productions.

“I’m looking down and then this teacher’s like, Jennifer, how about you,” Franco said. “I’m pretty sure in that moment, I was shaking my head no, but the word that came out was, ‘Yes.’”

“It was my first semester and it kind of gave me the chance to meet some new people, see that I could maybe fit in here, and I kind of fell in love with theater. I fell in love with stage managing, and then not only that, it gave me a kind of reason to pursue other things in school.”

Majarian, who has an equity stage management background, said he saw a “woman warrior” in Franco from the beginning.

“It was a good fit and she needed that collective sense of purpose,” he added. Majarian has been teaching at Cypress for more than 35 years.

Following her graduation from Cypress in 2012, Franco transferred to USC in their Bachelor of Fine Arts program. She graduated May 2016 and is now a stage management intern at South Coast Repertory in Costa Mesa.

“It’s nice to sort of pass on and and have your students actually take it to another level,” Majarian said. “I think that’s the greatest thing we have as faculty is when our students innovate beyond us, and I think that Jennifer’s done that.”